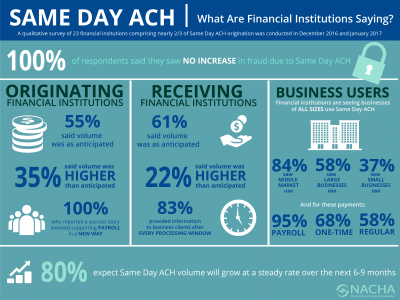 Since the 1907s the ACH Network has been the foundation of payment processing.  Its founding fathers instilled stability as the primary tenet, speed was an afterthought.  That all changed in March of 2018 when the three phases of same-day processing were implemented.  Now, based on a series of rules governed by NACHA, the settlement of credit transaction between two finacial institutions can be consummated using the Same-Day process.

Before the advent of same-day processing, there was only one settlement window every day.  The new same-day rules add two additional windows for settlement.  Thus affording initiating institutions more flexibility with the timing of their batches.

Currently, there are two windows in effect (note all times are EST):

It is important to note that non-same-day transactions are not affected by the new rules and existing rules remain in place.

By entering today’s date in the Effective Entry Date of the ACH transaction and meeting the submission deadlines you have identified the transaction as same-day.  If the date is stale or invalid the operator will process the transaction in the next available window, which may be the next day.

Optionally, the ODFI may require the originator to show a more explicit intent for same-day settlement.  The standardized same-day indicator is putting the settlement time in the 6 position Company Descriptive Field of the transaction. The standardized format for the two existing windows is “SD1300” for settlement at 1:00 PM and “SD1700”.  Once the third window becomes effective the format would be “SD1800” for a 6:00 PM settlement.

While any account that can receive ACH transactions today has the functionality to receive same-day transactions.  However, there are some exceptions to the rule.  First, accepting same-day transactions is optional.  Originators have the option of participating or not. Part of the same-day rule was the addition of a 5.2 cent fee assessed to the originator and remitted to the receiving bank to offset the cost associated with processing in the new windows.

Additionally, single transactions are limited to $25,000.  Any transaction denoted as same day over this limit will be processed and settled as next day transactions.  Finally, IATs are excluded from same-day eligibility.

NACHA’s extensive research into the benefits of same-day ACH resulted in over 60 potential use cases.

For more information on ACHeck21 and how we can satisfy ur ACH needs, click here.

NACHA has multiple reports, studies and other important information on their site, click here for ACH same-day facts and figures.